In the attic at Austnes there is a chest from the 1700s. It belonged to the people who came moving and bought the farm many generations ago. At the time, Austnes was a ford with a ferryman. Since then, several bridges have been built. Time and again they have been destroyed by floods. Today’s bridge is from 1952. In those days, Austnes was run in the traditional manner, with cows, two or three pigs and grain. At times of spring farming and haymaking, everybody had their hands full. The labourers demanded breakfast, coffee at ten and dinner at noon. This was followed by three-o-clock coffee and “nonsmat”. The latter had its name from latin nona, nine, meaning the ninth hour after starting work. With all the extra people to feed, salmon from the river was a welcome resource.

Today, Sabreein and Ola are the hosts at Austnes. Ola grew up on the farm and was introduced to fishing very early on. The joy of hooking a fish has followed him ever since. Few have spent as many hours in the mountains and by the river chasing trout, capercaillie, grouse and salmon. With the appreciation of nature came the interest in biology and ecology. He knows what conditions trigger fish to go for the fly and when it is time to let it rest. Expertise he gladly shares. He also works actively to improve living conditions for sea trout and salmon in the river. Sabreein sees to it that you settle in comfortably at Austnes. This includes cooking and serving according to your wishes. Together, the couple look forward to develop Austnes further. 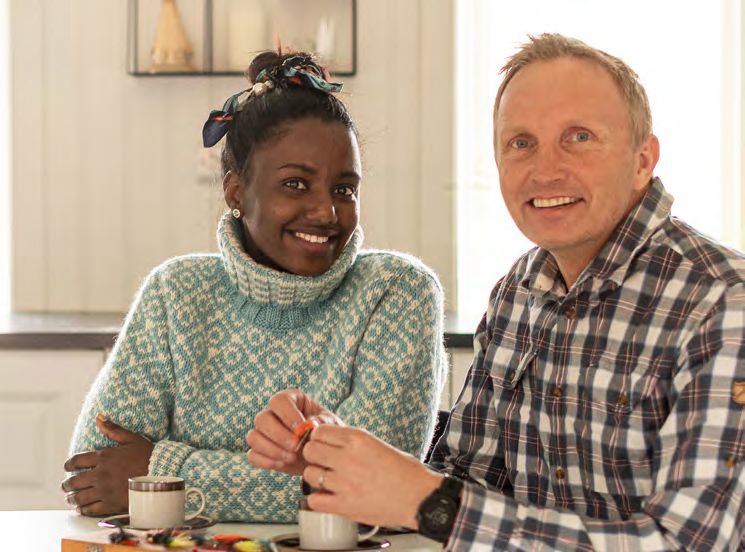